There was a time when a Sportive would be seen as a big event for me, so much so that I would even lay my clothes out on the floor the night before, write check lists and plan an energy fuelled breakfast. Now, without wanting to sound too cocky, I don’t even want to attend them as I think they are a bit too ‘fun-ride’.

When Douglas and others said they were keen to do it and that we would have a BBQ in the evening, I was up for it, if only to ensure I had some friends to ride with at the weekend!

As I arrived at the Evans Cycles Ride It check-in, it had the charming feel of excitement amongst many of the riders, who I suspect were going through their check-lists. The reception, the quintessential village hall, was staffed by enthusiastic volunteers proudly displaying and hopefully selling their cakes. I settled for a weak cup of coffee and smiled at the 1980s 50p tariff. 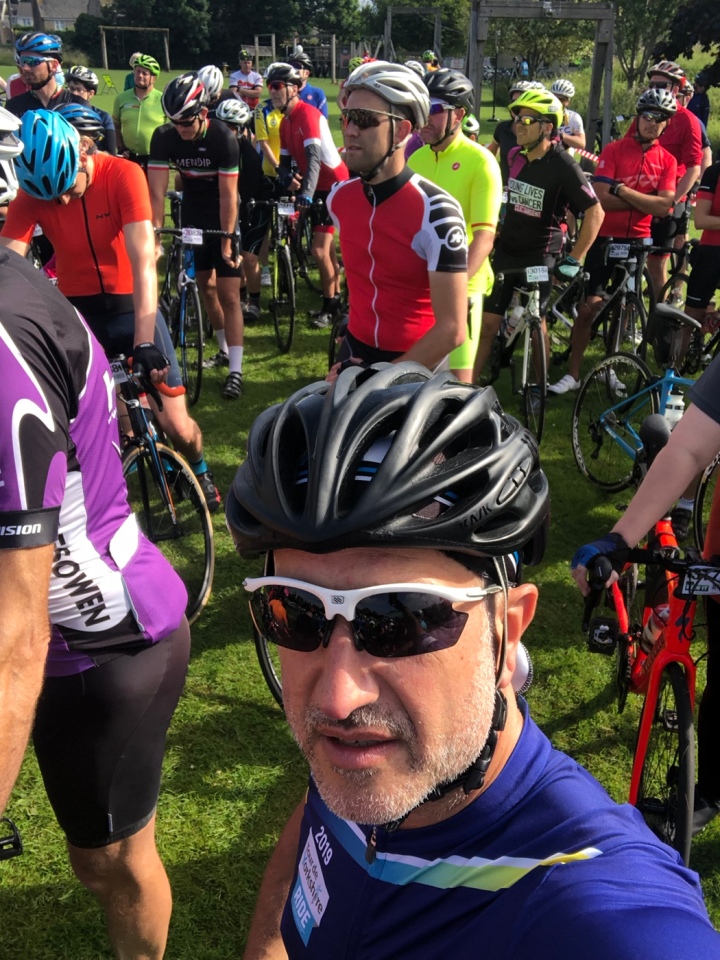 There was no plan for the ride, or not one that I was aware of. So, as we rolled out of the gate as a group of seven, we quickly found ourselves separated by the other riders amongst us and I found myself near the front of that pack with Douglas and Graham.

The next thing I know I am racing towards Sherston at over 20mph looking to keep up with Graham, who in turn is excitably chasing down three other riders. The short version of this section, is that we did that for ninety straight minutes, barely pausing for breath, and arrived at the 31 mile refreshment break with an average speed over 20mph on the clock. Probably best that we slow down a little from here. 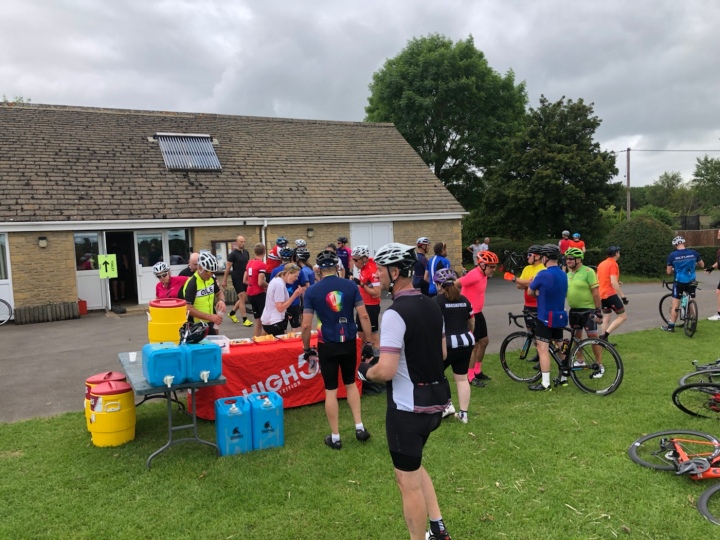 We didn’t. We persevered, this time with the Marshfield group, but still with plenty of push from the front to keep the tempo up. We weren’t chasing down the next stop, in fact at this point we weren’t chasing anything, but from my own perspective I simply felt like racing. My heart rate was high, my cadence fluid and my mind felt positive about how my body felt. 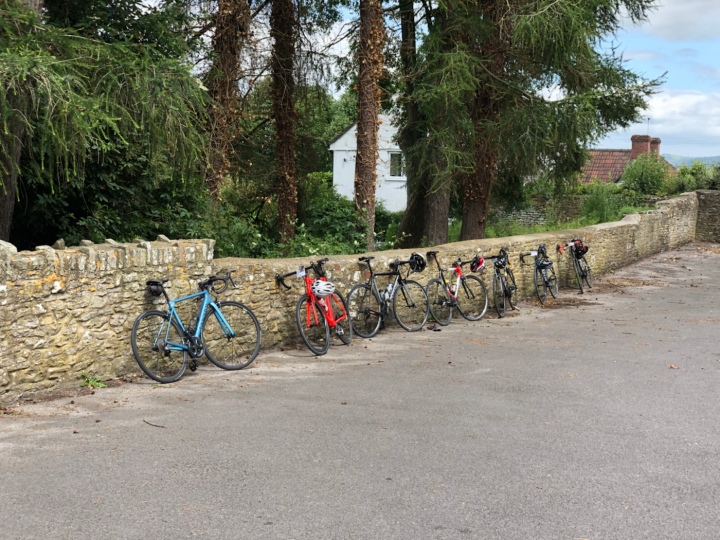 By the time we arrived at the next stop at Wickwar we were feeling pretty beaten by the headwind that was now constant and clearly there to ruin the party. In need of fuel; cake, banana, biscuits or anything that I could get my hands on, it was on my mind that we should try and push this hard right to the end.

The good news was that Graham has the same mentality and energy levels. The bad news was that we were clearly now slightly above the level of our friends at that time and not riding together was clearly on both our minds. Although the average was now down to 18.4mph, we both knew more tempo riding, and a couple of big hills, was to come. 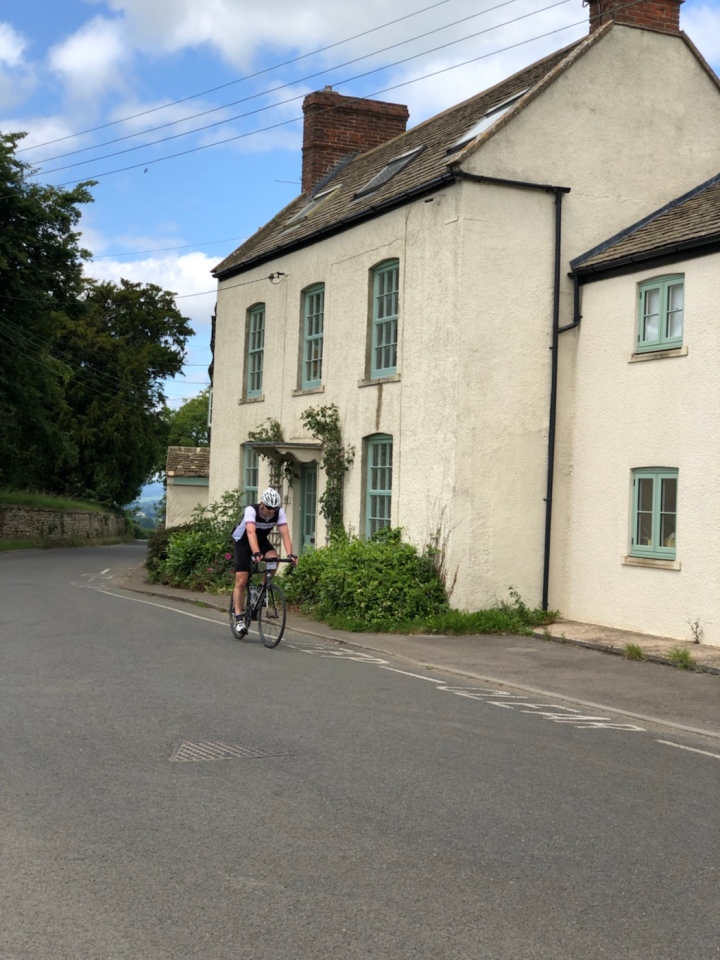 Within a few minutes of leaving the stop we were back out on our own. No time for chat or recovery, we paused only at junctions and took turns pulling each other through the still strong winds. Nothing was getting easier. My legs were feeling sore, I was now starting to search for other gears as the gradient increased and I was shifting around on the saddle as I rode trying to find a more comfortable position. We were feeling it. 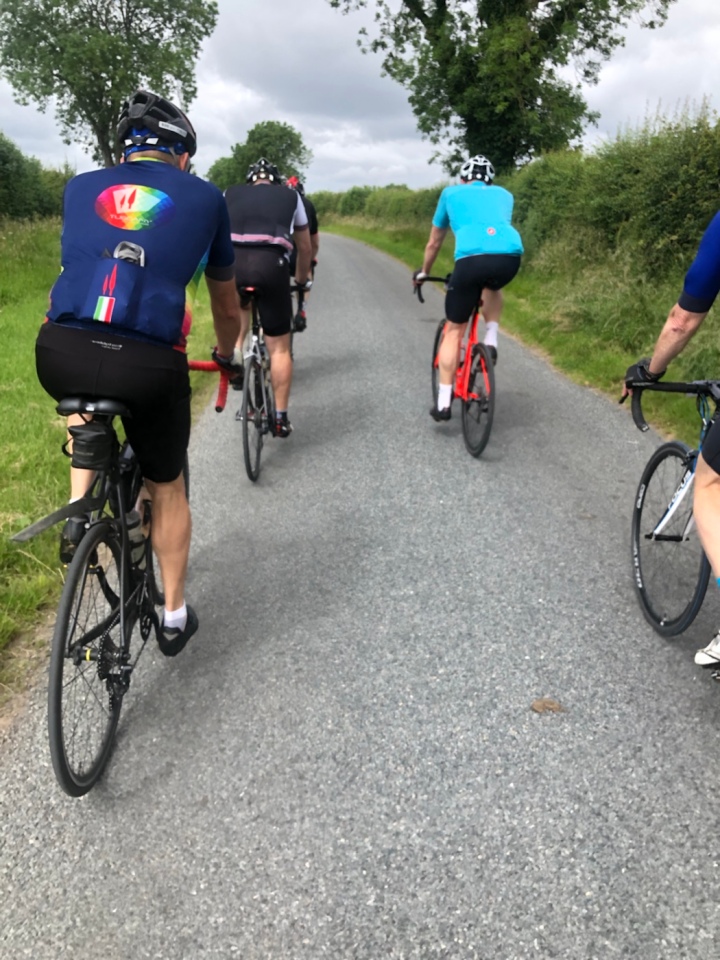 The hill out of Wotten-under-Edge isn’t a nice one. It ramps up to about 14% at its peak and it was going to need all of my recent Alpine riding to help me get up it, especially in a tough bottom gear. Weirdly though, it was ok. Sure it was hard and at times I was weaving across the road and hardly progressing, but I knew I had it. I could see where the gradient would ease and better still there was a rider ahead in my sights.

I’m pleased to say that not only did I catch him, but as he was easing off to recover, I changed up a gear and pushed harder into a pace and drive that I took with me all the way to the top of the hill. I enjoyed that!

As I regrouped with Graham, his cramp was really biting and I felt for him as the temperature was rising. To his credit, he didn’t grumble and other than the one stop for a stretch, decided to push on so we could finish – and relax!

Fortunately, the next part of the ride was by far the easiest and it gave us an opportunity to count down the miles on the Garmin as we got closer and closer to the old ladies with the coffee urn. Then after one final wind beaten push, we rolled under the finish line in the field to a hero’s welcome (I might have lied there) but we did get a cheesy but appreciated medal and the reward of a finish photo together. 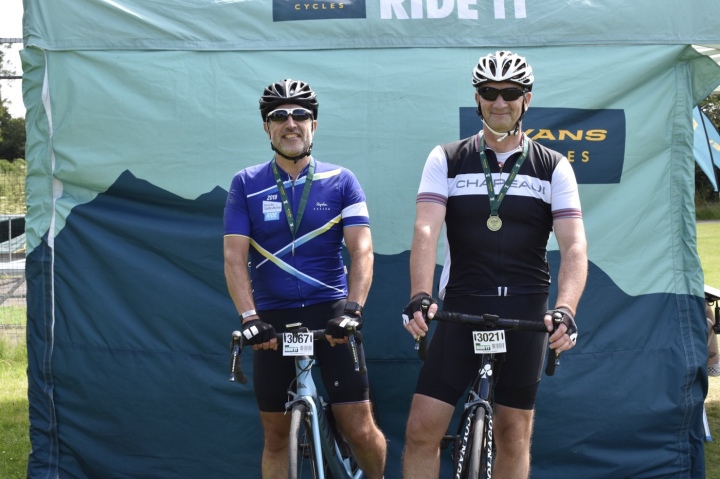 Would I do it again? Yes. It was tough because I made it that way, and I made it tough because others were there for us to chase. It created an event, it meant we had a BBQ that might not ordinarily have happened and it gave me an average speed over 88 miles of 17.7 miles per hour – a personal best.

I’d call that a fun ride.