ScareCrow straight is quite infamous within our little cycling group as it represents the final stab of effort on about 90% of the rides that we do.  That in itself is quite odd, as we go off in every direction possible to reduce repetition, but it still always seems to end there.  In the early days when rides were a little shorter it would represent the final sprint finish.  I say sprint, we are not talking about a 300m dash down the Champs-Élysées, more of a 3 minute plus laboured push up a gradient – usually into the wind.

Getting a good time is never as easy as you think; wind direction, legs, mood can all be factored in and perhaps the biggest one at times is having someone in the group whose desire to give it a go matches your own.  I think I’m just outside the overall Strava Top 10 as I write this and as I look at the times above me, I am pretty confident I am not going to be getting much higher for a while.

And that got me thinking.  At the moment when I am taking on ScareCrow my legs are heavy, my back and neck are as sore as my legs and just holding a reasonable cadence can feel a struggle.  But as I look down at my Garmin and see that we have registered 105 or 106 miles I am not surprised.  If anything, I am delighted.   I’m delighted that my legs have just knocked out a century but I am even more thrilled that they are still wanting me to push on and get one last ounce of effort out of them.  It’s a horribly nice feeling. 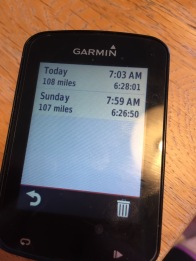 If I look back at my last five years of cycling I have had a real blast.  Met some great people, been to amazing places I thought I would only see on a post card, and enjoyed a sense of mental well-being that I didn’t even know existed.  If I were to single out any particular lesson that I have learned during these thousands of miles and almost as many laughs along the way, it would be that it is only the limits one places upon themselves that prevent them from going further.

If I take my mind back to that first organised ride I entered, it was the British Heart Foundation ride in Wiltshire, a 48 mile bike ride through stunning (but very windy) rolling fields and country lanes.  The night before I lay my kit down in a neat arrangement on the floor by the bed, like a soldier rechecking his kit bag before battle.  Gels, gloves (long fingered and mitts), sun glasses, sun cream, lip balm, phone, money, rain coat, padded shorts etc.  I even used to pack first aid kit convincing myself that it was extremely likely that I would be stung by a wasp or bee during this extended 5 hours of cycling!  I should add that it is only whilst out on my bike that I have actually been stung by a bee or a wasp so I do feel somewhat vindicated in this paranoia now.

At the moment we, and myself included, are rolling into coffee stops 50 miles into the ride thinking that we are now nearly at the half way point in the ride.  I love that.  I love that it means I have another few hours of riding left, energy in my body and the ability to set the pace by my mood and not by my legs.

Ventoux taught me that.  Riding from London to Paris helped too, as did Marshfield to London, battling up Alp D’Huez and I am pretty confident crossing the finish line at the Dragon and reaching the top of the Tourmalet will take the bar higher again.  What and where next? Who knows.

So, in the meantime,  if you are placing limits on yourself – what you can achieve on a bike, in a day or even in just life.  My best advice to you is to simply say “No’ to them, and go find out what you are really capable of.

I’ll let you know when I am in the Top 10 of ScareCrow Straight.

A middle aged man enjoying the better part of life on a bicycle with like minded friends. View all posts by Dadonabike